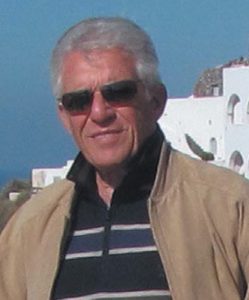 Len Camarda has published a few short stories but The Seventh Treasure is his first novel. He is also an accomplished painter and believes writing and painting are very inter-related, as the writer must paint images in the reader’s mind to be effective.From Brooklyn, N.Y., where he met and wed his wife Terry, he is a graduate of St. John’s University, with B.S., and M.B.A. degrees.  A 40 business year career, mostly internationally, took him virtually around the world, including working and living in Panama, the Netherlands and Spain with his wife and daughter, “George.” Living abroad was truly life changing, experiencing different cultures, awesome vistas and creating friendships that have endured for more than thirty years. The majesty, magic and mystery of Spain, however, were the inspiration behind this novel. The lifestyle, the people, the food and the unique character and traditions of each region of Spain open up new vistas and experiences that create an indelible mark. He returns often to Spain for an almost annual infusion of España.

Len now lives in the low country of South Carolina with his wife and two toy poodles, Demi Tazza and Cappucino. An ambiance of beautiful weather, live oak trees dripping with Spanish moss, and his terrace overlooking a tranquil lagoon; all contribute to a perfect environment for his creative side to flourish with the beginnings of a second novel and more paintings.